The Brunettes in front of Bruskis’ Beer Bazaar location to open in Libertyville, Summer 2018!

The LRC is finally getting a clubhouse! With nearly 5 years of building this running community and the unfortunate (but timely) closure of Mischief’s Brewing Coffee & Tea Shoppe located at 725 N. Milwaukee Ave. in Libertyville, it’s time to take our next step. After bringing the LRC back there for our Saturday morning runs and speaking with the proprietors of Mischief’s Brewing about the space, we finalized our business plan and put a bid in for the lease.

Situated next to the Libertyville Metra station, this location is prime for a tap room that will feature food trucks on the weekend and, of course, play host to our group runs. The LRC community we fostered, combined with Libertyville’s lively dining scene and the foot traffic from the train station, will be vital to our success.

The unconventional way I’ve been operating the LRC as more of a social gathering and exploratory venture rather than a traditional training-focused club has been leading up to this. While profiting from the Club itself was never my intention, my endgame was to create a retail space where we could gather and which would feature talents from within the LRC and the people and places we’ve been highlighting.

We moved to Libertyville almost 5 years ago with a plan to open a running retail store with in-house brewery. In addition to possessing business acumen as a lawyer and accountant/financial advisor, we also have a strong background in running retail experience and assisting friends and partners open their local businesses (Taco in a Bag, One Trick Pony Brewery, and Alarmist Brewing), so I figured I would combine my passion for running with my love and interest for craft beer.

Things got a bit more serious after we took the LRC on our first Colorado running trip a few years back mostly to visit a running store with in-house brewery I learned had just opened in 2015, Shoes & Brews – the first of its kind in the country.

Facing non-compete agreements and a sea change in the running retail industry, we backed off the running retail store idea. We began looking for a LRC clubhouse to lease then, seeing as how the size of our fun runs was getting too big to handle for some establishments, our focus shifted to opening a brewery tap room.

Like the beers we’ll make, this concept has been meticulously orchestrated and brewing for a long time. For the past 9 years, we have been traveling the U.S. while I not only run a marathon in every state but visit and take careful notes of every local brewery we visited (258 to date!), many of which are featured in my A Bear On the Run blog.

Through many conversations with brewery owners, brewers, and staff around the country, as well as entrepreneurs, home-brew friends, and the experience and relationships made through the community-building that is the cornerstone of Libertyville Running Club, the ability to strike when an opportunity arose was possible.

Bruskis’ Beer Bazaar is derived from “Brunette” and Melissa’s maiden name, “Gadowski.” Our “bazaar” will offer goods from local artists and purveyors of foodstuffs, and the name also reflects the spirit of the charitable work we’ve done with the LRC, which we will continue by donating a portion of all beer sales to featured local charities.

We purchased tanks from our friends at Flossmoor Station Brewery and construction has begun on what we anticipate to be a 2-3 month buildout. We are please to have my high school buddy, Ryan Buchmeier, on board as head brewer. Ryan is a building contractor, owner of 2 Bones BBQ (the guys we use every year for our Run of the Dead event), and my homebrewing partner since 2001. We’ve been testing our recipes on the equipment and intend to be ready with 6 beers on tap when we open this summer.

Me and Ryan and the beards, soon to bring you some tasty brews 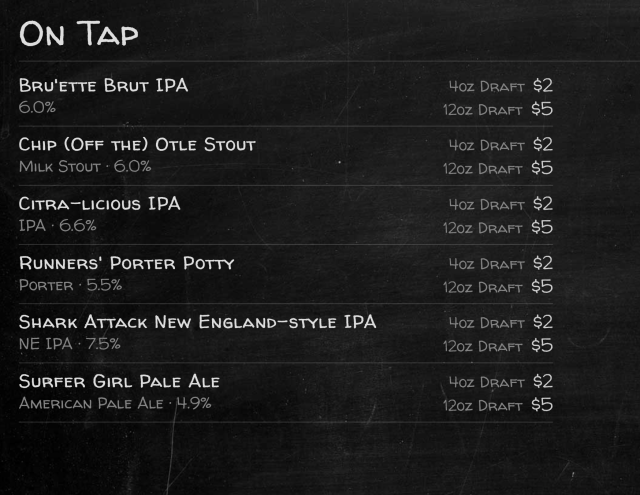 What will be available on opening day

It pays to run with friends and you don't have to pay for that here. So whether you're a new or experienced runner, training for a race or just hoping to have a casual run with friends, this page will be a resource for all active people in and around Libertyville.
View all posts by libertyville running club →
Image | This entry was posted in Uncategorized. Bookmark the permalink.

2 Responses to LRC to Open a Microbrewery Tap Room!